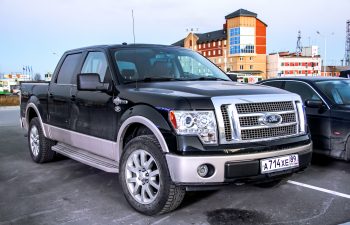 Are you wondering if your Ford Truck qualifies for a Lemon Law Claim? If you own a Ford Truck and you are experiencing the issues mentioned below, please submit your information using the form on this page.

Some History about Ford Trucks

The better utility truck came along and was called Ford F-450 as the top of the line super duty trucks.

Many people wonder what does Ford F150 mean?

After World War II Ford’s next generation of consumer trucks, became known as the F-Series Bonus Built trucks. Ranging in size and capability from the half-ton F-1 pickup to the cab-over F-8, the lineup marked the beginning of Ford’s comprehensive truck-lineup strategy.

In 1957 Ford redesigned the F-series’ exterior, making it wider, with styling that continued for decades.

In 1959, Ford began offering Four-wheel drive as a factory option.

In 1961 on two-wheel-drive models, Ford improved suspension and started the slogan, “Drives like a car, works like a truck.”

In 1995 Ford’s F-series became the world’s biggest selling vehicle, passing the Volkswagen Beetle even though the Beetle kept the title for best selling passenger car.

Today, the Ford F-150 is the best selling vehicle in the U.S.

For many years, the F-150 had a great reputation. But now the diversity of problems are hurting it’s reputation as a reliable truck. Now, problems with the Ford engine are so common, the National Highway Traffic Safety Administration has checked into the F-150 to find out what’s going on…

Here are some models that have seen their share of engine problems:

And the newest Ford trucks continue the trend of having engine problems.

One problem triggered a recall of 2017 Ford truck models. The problem it seems was a complication with the transmission complication that made it so the truck couldn’t shift gears.

Some of the Ford trucks would be in park and yet the transmission didn’t stop moving. That’s pretty dangerous.

A huge number of varied complaints include some that are seriously dangerous to one’s safety.

The Ford F-150 complaints about jerky shifting, losing control, abrupt shifting in first gear without warning, are all on record from owners.

One owner spoke about their 10 speed transmission having so many problems, they included whining, clunking and hard shifting, even after taking the truck back to the dealer three times and they still weren’t able to fix the problems.

Stalling is another big issue. It occurs when the truck slows down or stops completely. This is a powertrain issue. It can be very dangerous, depending on where you are at when you’re driving. The middle of an intersection, on the freeway, etc.

These are some of the years that the Ford F-150 are known to have a lot of transmission and engine problems:

If you own one of the Ford trucks mentioned above and think your truck might qualify for a lemon law claim, please submit this form on on our contact page.